“Then Jerubbaal (that is, Gideon) and all the people who were with him rose early and encamped beside the spring of Harod. And the camp of Midian was north of them, by the hill of Moreh, in the valley (Judges 7:1)…So the people took provisions in their hands, and their trumpets. And he sent all the rest of Israel every man to his tent, but retained the 300 men. And the camp of Midian was below him in the valley. That same night the Lord said to him, “Arise, go down against the camp, for I have given it into your hand. (v. 8-9)… And the Midianites and the Amalekites and all the people of the East lay along the valley like locusts in abundance, and their camels were without number, as the sand that is on the seashore in abundance. (v. 12)… When they blew the 300 trumpets, the Lord set every man’s sword against his comrade and against all the army. And the army fled as far as Beth-shittah toward Zererah, as far as the border of Abel-meholah, by Tabbath. And the men of Israel were called out from Naphtali and from Asher and from all Manasseh, and they pursued after Midian. (v. 22, 23)

This is a fascinating story of Gideon, a man whom the angel of the Lord called a “mighty man of valor” (who also had a very human sense of fear, Judges 7:10-11). He was up against a huge number of enemies, but God wanted to use Gideon to show His power even in the most daunting and unlikely circumstances.

Today we stood at the top of Tel Jezreel and saw the Jezreel and Harod valleys stretched below. I don’t know exactly the distance that this valley spans, but it is huge! It was like looking out an airplane window and seeing farms and crops and tiny buildings and toy cars below. The Bible says the “Midianites and Amalekites and people of the East lay along the valley like locusts in abundance, their camels without number.” Looking out over that area today – and imagining how many people it would have taken to fill it – boggled my mind and made me respect Gideon all the more.

It may be a stretch to see a teeny bit of myself in Gideon, because (1) I’m extremely tired, (2) I could never even come close to considering myself a “mighty man of valor”, (3) I am not up against large groups of enemies, and (4) I’m not having to do anything remotely brave (besides going into Jordan tomorrow…I must confess that I’m a bit intimidated by that.)

But being the only woman in a group of very talented, educated, artistic, eloquent, accomplished men, I end up feeling a little bit insignificant – not because of anything they have said or done to make me feel that way! It’s just me. I’ve seen and heard and watched what they are able to communicate – whether by spoken word or through crafting a video or still image in a way that I’m convinced will reach people who may not be convinced about the truth and importance of our Designer and this land He created.

But because I know God can use small things to make a difference, and I’ve seen how He is continually blessing this project in a number of visible ways, I am confident that He can even use little me, whether through this blog, or a beautiful picture, or if I’m able to encourage these men along the way. None of this is “about me” – it’s about Him, and lifting Him up and lighting the path for others. If Gideon can – through God’s help and direction – defeat innumerable enemies with only 300 men, I can make a little difference too, and I know that’s the case for every Christian.

MY MIND IS A JUMBLE.

I’ve got information overload. And I’m with eight guys, four of whom would love nothing better than to talk and debate geographical locations and archaeological discoveries all the livelong day. So (selfishly) I’m glad I will have these blogs to be able to go back and remember some of the things I’ve learned: things that in some way I feel like I should’ve already known.

We began our day early again, especially because we were loading up and leaving the Sea of Galilee. As I was finishing my packing, I looked out our balcony window one last time and simply couldn’t believe my eyes at this sight. I literally tripped over the bedspread trying to find my camera, which was already packed away, and had to settle for my phone camera. The heavens truly do declare the glory of God! 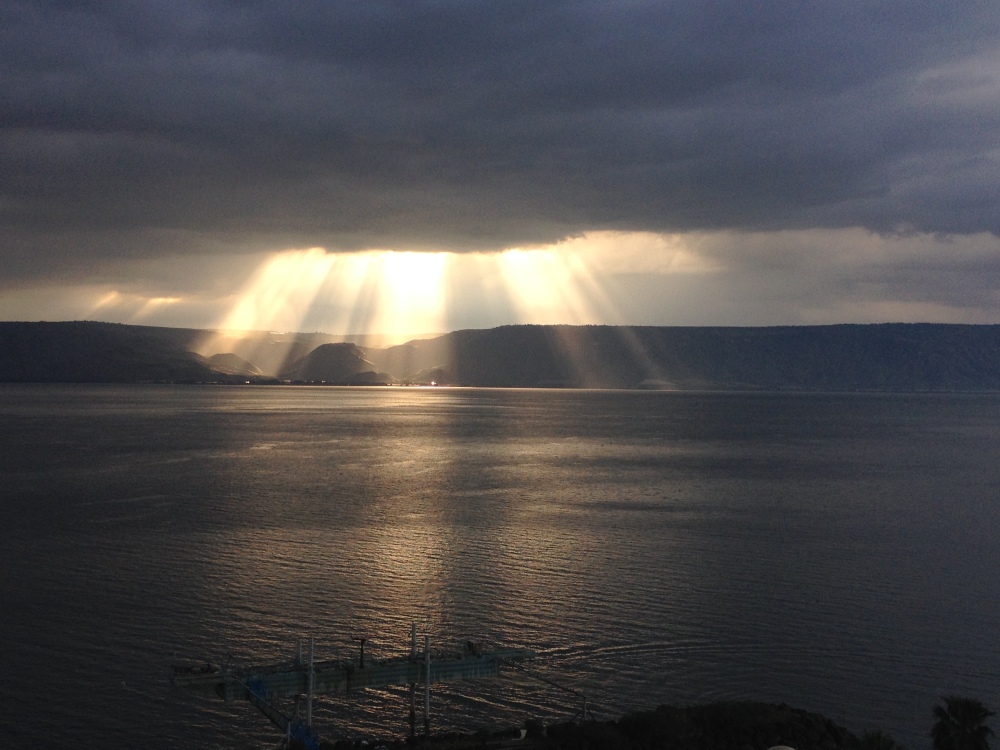 The last few days we have headed north, but today we went south, following the western side of the Sea of Galilee to its southern tip, and then following the Jordan River. We stopped briefly at the “Yardenit” – a traditional site for people seeking to be baptized in the Jordan. It felt quite touristy, with metal barriers set into the water where people will line up, waiting their turn to be baptized. The water had been dammed up on one side, so the river was wide here, unlike the narrowing at other places (because so much water has been pumped out to irrigate crops.)

We passed dozens of orchards, many of them mango and banana and pomegranate. They are often covered in a tent-like material that allows sunlight to filter through, but protects them from birds, insects and hail. I noticed also on some of the smaller trees, there are fairly large pieces of something shiny (like foil) that evidently are there to frighten birds away.

Continuing south, we could see across the valley on the other side of the Jordan River in to Jordan, the country. It is a relatively new country, only becoming a state in 1946. Tsvi said there is a peace treaty between Israel and Jordan that has to do with water sharing.

Our next stop was at Beit She’an / Scythopolis, a city that is over 5000 years old. My brain still can’t wrap around how old things are here. The ancient city Scythopolis was discovered when a farmer, mowing his field, hit what he thought was a rock with his tractor…but it turned out to be the top of a column. They’ve since excavated and discovered simply amazing artifacts and an enormous ancient city that was destroyed by an earthquake centuries ago. It is one of the most preserved cities in the world. We climbed around in the amphitheater, along the ancient streets covered in colorful mosaics and marble. The men joked about letting “the wife” decide it was time for a remodel, because some marble tile was found placed on top of beautiful mosaics. 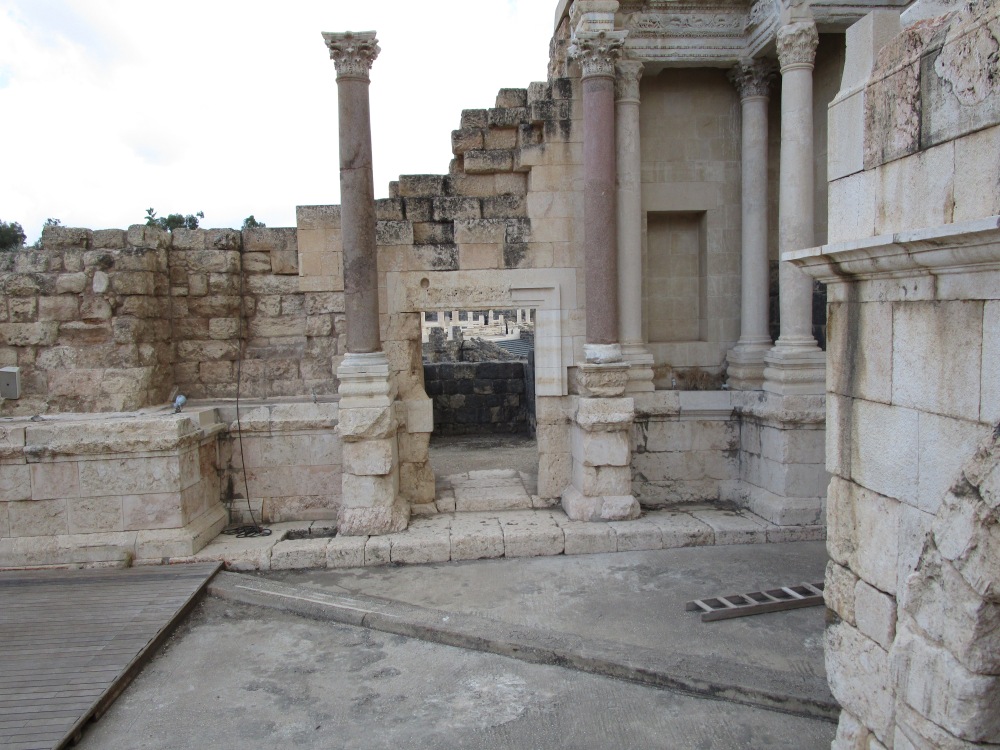 The bathhouse was fascinating. Their heating system was very contemporary, using steam to heat underneath causing condensation and several other things I’m too tired to remember and forgot to write down.

My own personal nightmare was here in Scythopolis: public latrines. Have you ever had those dreams where you HAVE to go to the bathroom and end up in a place where everyone is staring at you? Apparently this was a reality back in the day…long rows of “benches” with some sort of trough “behind” you and a little stream of water complete with toilet paper twigs and leaves running in front of you. It’s hard to imagine having a nice little conversation with someone sitting on the potty next to you. I’ll probably have that dream tonight…

The huge hill behind the ruins is Jabesh-Gilead. There are 191 steps to get to the top: yes, I counted! When Saul saw the Philistines camped at Gilboa, his “heart  trembled greatly,” (1 Sam. 28:19) and I know how he felt, because my heart trembled greatly (with exertion, not fear) after climbing those 191 steps! And a few chapters later we see that his fear came true: Beth She’an is where the Philistines fastened Saul’s headless body to a wall after he and three of his sons (including Jonathan) died on Mt. Gilboa. There are Egyptian ruins atop the hill as well, that date back to the time between Joshua and David. 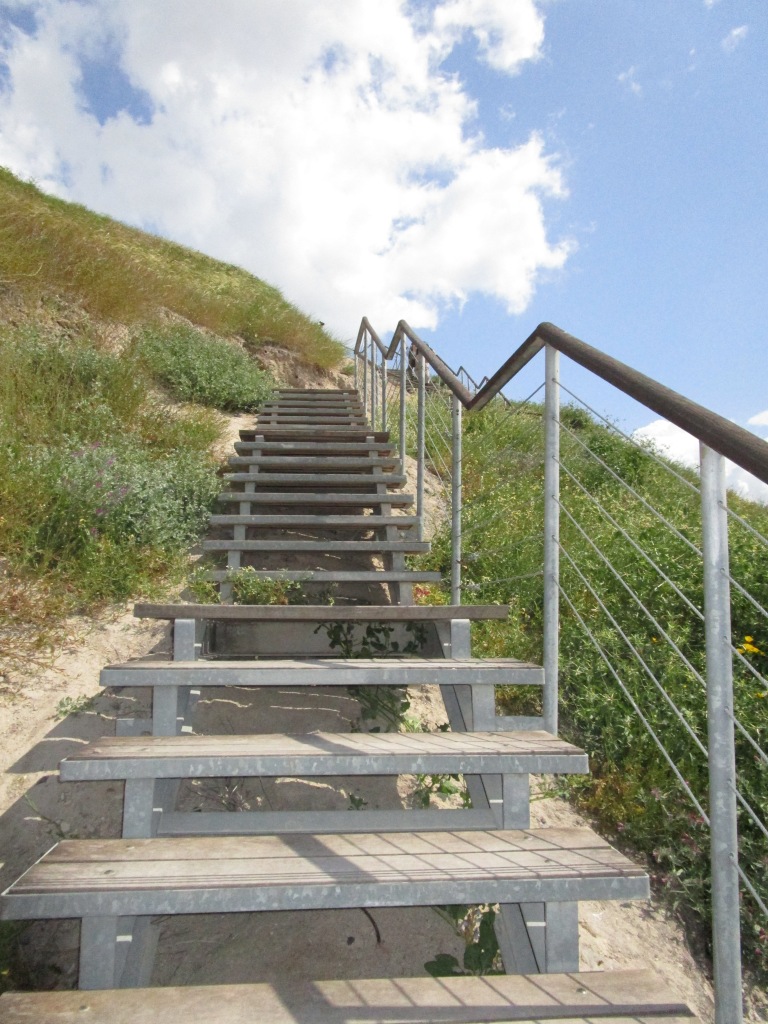 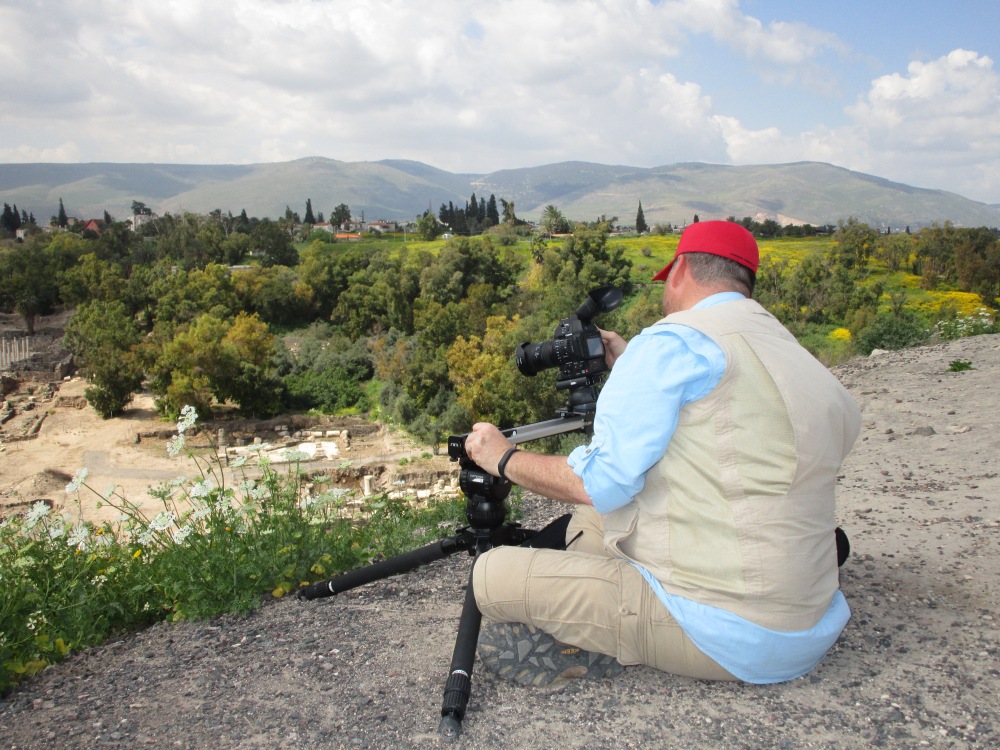 We spent almost four hours in these ruins. Jon filmed segments here and Doug took hundreds of pictures. I loved it!

We stopped for lunch in the nearby town. Jon and I went to McDonalds on one side of the street (hey, I EARNED every one of those French fries), and the rest of the group went to a Falafel stand next door. McDonalds was nice and quiet and nearly deserted, but the Falafel stand was overrun with Israeli soldiers. They were friendly but the place was crowded! 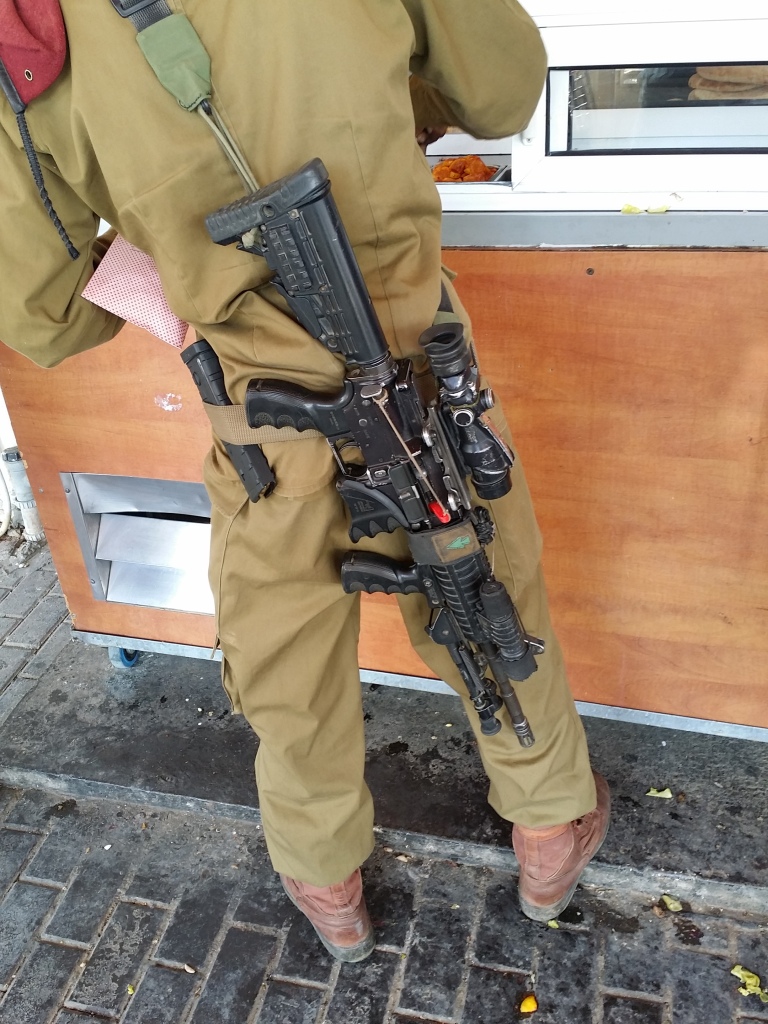 Next stop: Ein Harod – the springs where Gideon’s men drank either lapping like a dog or on their knees. You can read this account in Judges 7. Rick filmed here, stressing that the Israelites didn’t win against their enemies because they had great strength themselves, but because God was on their side. We then stopped at Tel Jezreel not far away for him to continue this segment. While there, a group of school children noisily came through on a field trip. Sunday is the beginning of their school week! They were probably 11 or 12 years old and of course, noisy. Since we were already set up, we asked if they could just wait for five minutes to let us finish what we came for. They sat on the nearby benches and giggled while Rick tried to concentrate on his lines. When it was finished, they clamored around him, fist bumping and saying “YouTube??” 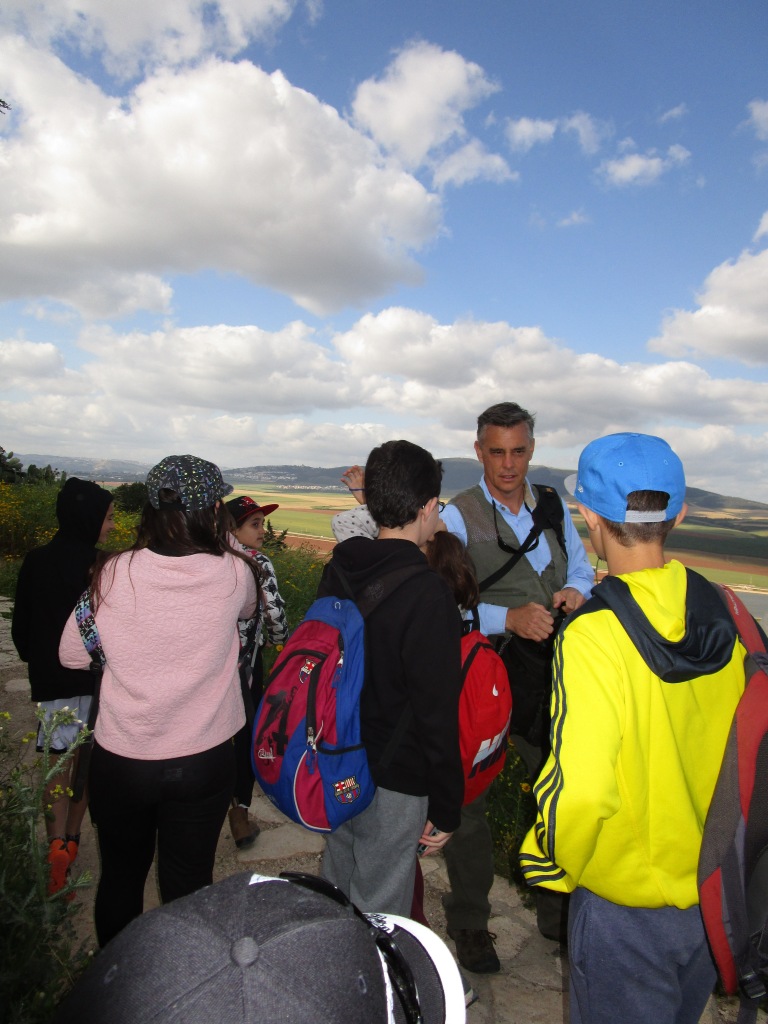 And I had one of those moments of regret that make me want to kick myself. After Rick finished, I went behind the children to go back up the path, and one of the men with the children stopped me. They were obviously Jewish (a group of ultra-orthodox Jewish boys came immediately afterwards, with the long sideburns.) The man asked me what we were doing, and I replied, among other things, that we were filming Bible class lessons. He said “For Jews, or for Christian?” Without really thinking, I replied “For Christians.” When I repeated this to Rick- he said “for everyone!” And yes – this video series is for EVERYONE. Just as the gospel is for everyone. I wish I could go back and find that man and tell him.

Our last filming stop was at Mt. Gilboa, where it was Jon’s turn. From there, we headed toward our hotel at the Dead Sea. It was a LONG DRIVE, and it was dark, and we were hungry, and the confined space of the van combined with sitting toward the back was beginning to make me carsick. But we arrived, had supper, and worshipped together before coming back to our room. And now it’s 12:30 a.m., and I have to be up in five hours and begin again! What a blessing!

The bathrooms here have been clean and nice for the most part, but they don’t flush their toilet paper in the toilet, it goes into a trash can next to the toilet. I know some back home with delicate septic systems who do the same thing, but it seems to be everywhere here. And the men don’t seem to think much about coming into the ladies restroom area to change out a trash bag or something custodial while women are in there. It’s different!

QUOTES OF THE DAY: 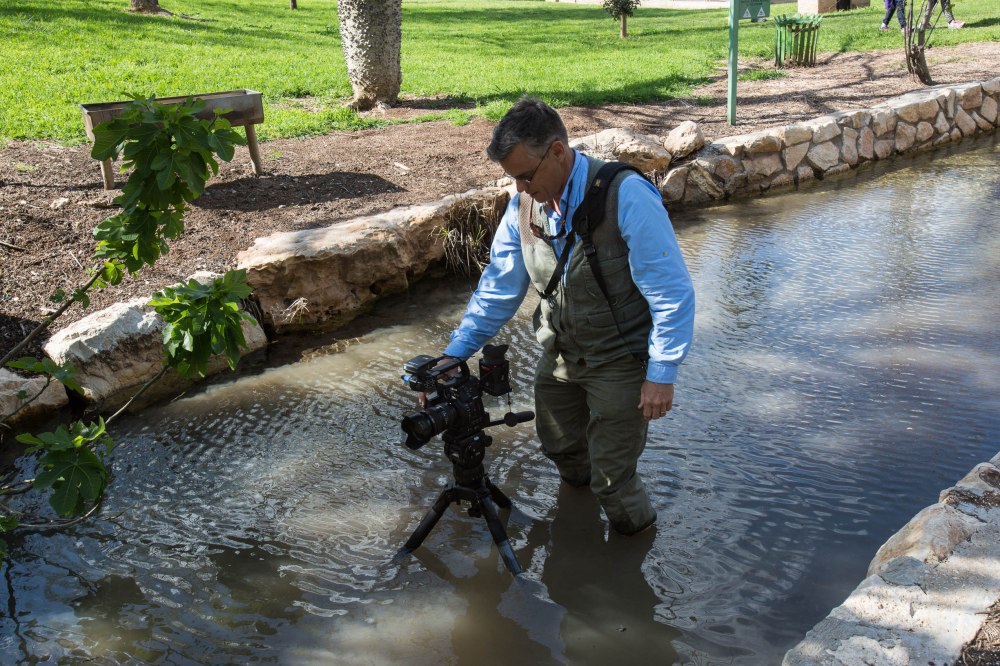 And as Rick said during our worship period tonight: yes, we are tired, but “we are privileged to be tired in Israel, because we are working to help people come to know the Lord.”

Good night from the Dead Sea! Tomorrow, we go into Jordan! And looking forward to Dewayne’s arrival tomorrow night!