“Then they seized him and led him away, bringing him into the high priest’s house, and Peter was following at a distance. And when they had kindled a fire in the middle of the courtyard and sat down together, Peter sat down among them. Then a servant girl, seeing him as he sat in the light and looking closely at him, said, “This man also was with him.” But he denied it, saying, “Woman, I do not know him.” And a little later someone else saw him and said, “You also are one of them.” But Peter said, “Man, I am not.” And after an interval of about an hour still another insisted, saying, “Certainly this man also was with him, for he too is a Galilean.” But Peter said, “Man, I do not know what you are talking about.” And immediately, while he was still speaking, the rooster crowed. And the Lord turned and looked at Peter. And Peter remembered the saying of the Lord, how he had said to him, “Before the rooster crows today, you will deny me three times.” And he went out and wept bitterly.” (Luke 22:54-62)

This morning we went down through the “Church of St. Peter at Gallicantu” into a dungeon of hewn stone. This is thought to be the house of the high priest Caiaphas, where Jesus was held through the night before His crucifixion, within sight of His Father’s temple. There are a number of steps you can descend to get into this prison cell, but there is also a hole 15 feet above where it is more likely that prisoners were lowered (or thrown.) The cell is cold, and hewn from solid rock into a circular shape. It is maybe 12 feet in diameter, with an uneven floor and slabs of rock jutting here and there. Voices echo off the wall.

We all stood in a circle around the bottom of the cell, and sang the song “He Could Have Called Ten Thousand Angels”. But I couldn’t help seeing Jesus in my mind’s eye in that cell: knees pulled up against his chest, shivering from the cold, aching with the pain of the bruises and beatings He’d received, and lonely – having been betrayed, denied and deserted. And He knew the ordeal had really only just begun. These thoughts were devastating to my heart, and I think similar thoughts were affecting every other heart that stood in that cell with me this morning.

(By the way – the street/neighborhood/city-wide party celebrating Jerusalem’s reunification was intense last night – we heard and felt the LOUD bass until nearly four this morning…not many of us slept through it. It’s still going on – I can again feel the bass vibrations, but hopefully won’t be quite as loud tonight.)

After Gallicantu, we went to Yad Vashem, Israel’s holocaust museum. “Yad Vashem”  – Hebrew for “place” or “monument”, and “name” – is taken from Isaiah 56:5: “I will give in my house and within my walls a monument and a name better than sons and daughters; I will give them an everlasting name that shall not be cut off.”  I knew it would be emotional, but it affected me more than I expected. We had the same guide that took us through last year, Hazy Freund. She is a fantastic, articulate speaker, a small woman with eyes that truly notice you.  Her roots are in Lithuania, and her mother-in-law is a holocaust survivor.

The museum itself is high on a hill in Jerusalem, and is a unique triangle shape made of unfinished concrete (“like an indelible scar that will never heal”, Hazy said) set into the hill. Pictures aren’t allowed inside. Stepping in, you again notice the odd triangular shape. You can see from one end to the far end made of clear glass – probably a couple hundred yards – but the side exhibit rooms aren’t visible because they’re set into the walls. The designer made it so that you can’t go straight through from one end to the other without entering and exiting each room between what Hazy called “ruptures” in the floor, representing obstacles that the Jews encountered. Skylights let in sunlight and the green trees of the “Righteous Among the Nations” exhibit.

As we stepped in, Hazy said “Let us leave a world that is comprehensible and enter a world of the incomprehensible.” We saw a movie projected onto the wall made of images captured from family members of Jewish victims in Russia, showing their synagogue school full of children. Hazy said she remembers showing it to a group of holocaust survivors from Belarus who couldn’t tear their eyes away, because they were “watching a world that had totally vanished.”

I remembered a phrase that Hazy used repeatedly last year, but couldn’t recall the exact words. I listened for it this year.  Speaking of those responsible for the holocaust, she said they “targeted, singled out, marked, abused, humiliated, tortured, and hacked to pieces” every Jew that they could find.

Here are a few other things she said and quoted:

“The holocaust didn’t take place during the night. It went on during broad daylight while people went on about their normal lives.”

Quoting Kurt Tucholsky, a German essayist, Hazy said “A country is not just what it does. It is also what it tolerates.”

“The irony (of the holocaust) was – you could get out, but where to?”

The Jews “woke up each morning not knowing what new decree would affect them.”

She spoke to Lauren, the young woman in our group, and said “please promise me, that when you grow older, fall in love, get married, and become pregnant – remember how blessed you are to have the choice to have your baby.” She was telling us that women were forbidden to give birth in the ghettos – that termination was “required”. These women who did give birth would wrap their babies in whatever scrap of fabric they could find and toss them over the ghetto fence into the arms of Christians on the other side of the fence, hoping against all hope that their babies would find a good home.  Of one ghetto, she said “the hinges of the doors creak with anguish and sorrow.”

We passed one exhibit that detailed the days of June 30 – July 3, 1941, when a Ukranian mob of men – with German encouragement – subjected women to four consecutive days of rape. One black and white photograph showed a woman dressed only in undergarments and an old-fashioned girdle and stockings running from her captors, mouth twisted in a desperate, horrific scream. Another photo showed two women also surrounded by tormenters: one of the women was clothed, her face one of shock, arms protectively around another woman who had been stripped – her face simply blank.

How could these things have happened?

I came across this poem in an exhibit about the village of Ponary, in Lithuania, where a mass murder took place:

“Softly, softly! Let’s be silent! Graves are growing here. They were sown by our tormenters, Green they grow, and fair. Toward Ponary run roads aplenty, From Ponary not one. Father’s disappeared, and with him All our joy is gone.”

Of her mother-in-law, Rivka, Hazy said years passed before she could ask her about her time a concentration camp. Rivka told her about being taken – “It was so fast, Hazy! We couldn’t understand what was happening – and by the time we arrived (at the camp), most of us were dead! Families were separated – before you could lift your hand to wave goodbye, they were gone.”

Hazy said that the survivors had a choice – to take revenge, or rebuild lives. Her mother in law said she did both: she had three children, fourteen grandchildren, and 71 great-grandchildren – and she said “each one is my revenge!”

I looked around at the faces around me while we went through. I think we all felt the same thing – I saw shock, sorrow.

For me, the worst thing was a photo of a Jewish grandmother with her arms around her grandchildren, trying to protect them. Going through this museum last year was hard – I was missing my kids. But they are self-sufficient, and are at the ages that they can protect themselves for the most part. But this year, as a grandmother, the thought of someone threatening or trying to take our little Jackson just ripped my heart wide open. I would lay down my life for him as I know the grandmother in the photo was trying to do. How many grandparents had to watch as their precious grand babies were forcefully taken by evil men? It is beyond my comprehension.

The final room is the “Hall of Names”. It is a huge, circular room with floor to ceiling bookshelves – 20 rows containing thousands of volumes – lining the room. Each row is filled with volume after volume – names and stories of holocaust victims. One section is not full – they are still learning names. “Please God we will find the final name!” Hazy said. In the center of the room is what looks like a huge lampshade. Inside the “shade” are various shapes and sizes of pictures of victims – people, souls. The “shade” has an open center topped with a glass skylight – symbolically funneling these souls toward heaven.

From there, our day went downhill…or uphill. We visited the City of David, and went through Hezekiah’s Tunnel (some of us did, anyway). But afterwards, as expected, the bus was unable to reach us because of the parade for Reunification Day. So we had to walk all the way (for some of us – a 2 1/2 hour walk) from the City of David to our hotel – a couple of miles, but all seemingly uphill. We encountered a LOT of people along the way – hordes of people who are celebrating. But they were all friendly and smiling and upbeat – it was fun to see! 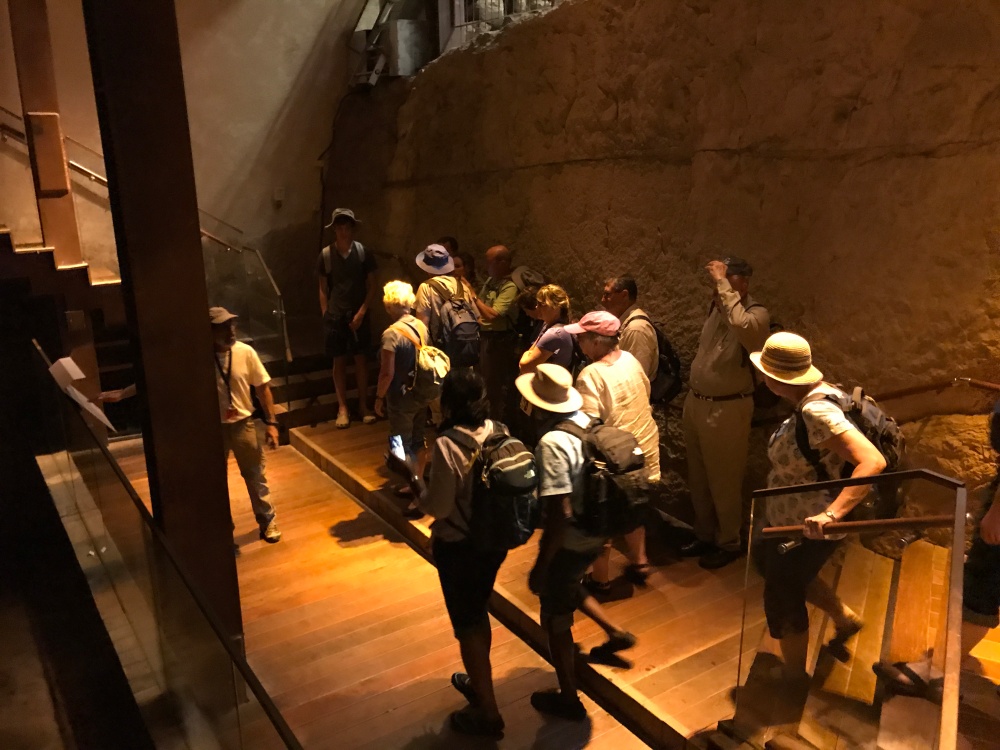 We are competely zonked tonight. Still lots to go tomorrow!