Sunday morning in Rome, our little group left Hotel Gioberti and set out on a half-mile walk around a few corners and down a sloped street to a small villa. A tall, medieval-looking door barred our entrance (until we figured out that we needed to ring the bell) and then opened onto a dark corridor that led to a beautiful open-air courtyard. Stucco walls in shades of terra cotta and shuttered wooden windows surrounded an oyster-shell shaped trickling fountain, and upstairs, we found our borrowed room. During the two days prior, our group had been blessed to see many sites of historical and spiritual importance, but Sunday morning, an even greater blessing was ours: worshipping the God to whom we belong.

As Christians have been doing in this city for nearly two thousand years, we sang together and prayed together, and spent time in the word together. John talked about Paul’s journey to Rome. The story of that journey is found in Acts 27 and is at the same time fascinating and terrifying – especially since we are on a ship (like Paul was) in the Mediterranean Sea (like Paul was) under the shelter of Crete (like Paul was) in the month of October (as Paul very possibly was…verse nine mentions the “fast” – the Day of Atonement – being over, which is September or October!)

Last night I wrote out the chapter. There is so much detail, yet so much unsaid between the lines. Verse four – “the winds were contrary,” …verse 7 – they arrived “with difficulty,” …”the voyage was now dangerous…” Can you imagine being in the open sea in a vessel that is struggling against the wind? I wonder what fears the passengers experienced as the ship had trouble docking in Cnidus. I’m a little nervous in our modern-day computer driven vessel! “But before very long there rushed down from the land a violent wind…” I can just see the pilot struggling to keep the ship under control, pointing into the wind – and being forced to give way. How that ship must have groaned and creaked under the pressure of the winds and waves as it changed course and was driven further out to sea! A heartbreaking phrase is found in verse 20 – “all hope of our being saved was gradually abandoned.”

Paul, however, knew otherwise. He told them that an angel “of the God to whom I belong and whom I serve” had told him that he must stand before Caesar, and that all of those who sailed with him would remain alive. I want to always remember Paul’s words, and Paul’s faith: “…I believe God that it will turn out exactly as I have been told.”

On Sunday, John talked about the places we’d been blessed to see. He reminded us how Paul had longed to go to Rome, and he was eager to give them the good news about Jesus. But the circumstances under which he arrived were not likely the way he envisioned them! John said – we had been walking in the footsteps of Paul, yet how much of Rome had Paul gotten to see? But it was obvious that “seeing Rome” wasn’t why he wanted to be there. Even after his difficult journeys, his arrest, his shipwreck – he wasn’t concerned about his situation. He was concerned about souls. He welcomed all who came to him. These chapters give us a window into Paul’s heart, into his magnanimous spirit. 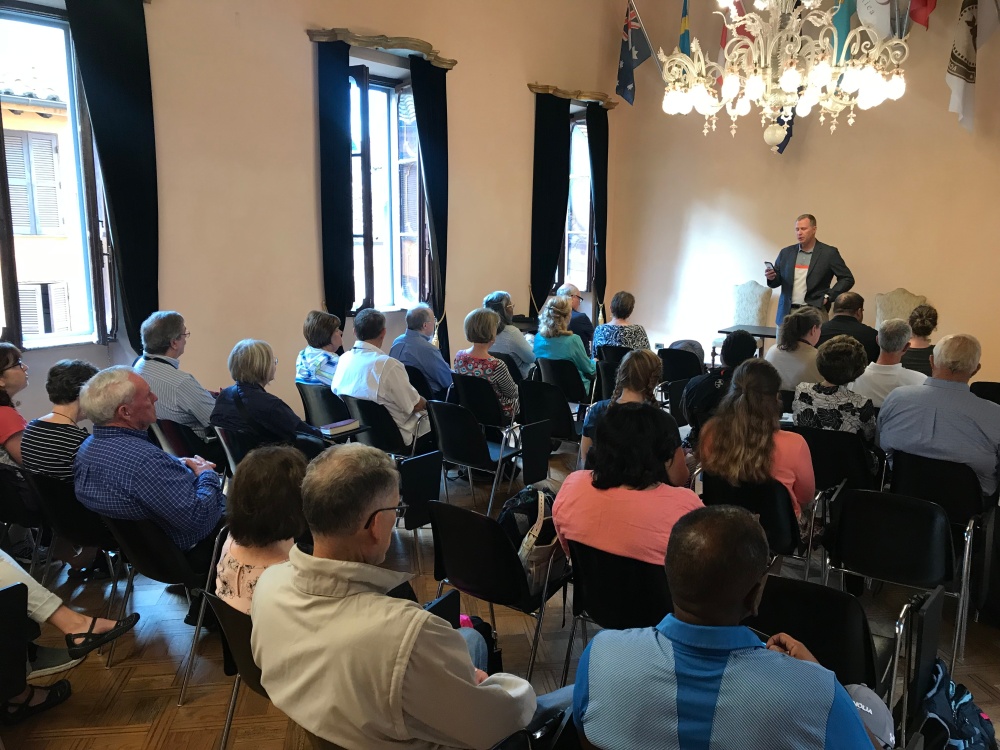 This has been a very different sort of trip than what we normally do. We left last Wednesday and flew into the night, arriving in Rome on Thursday morning. Last year, to get into the city from the airport, we shared a big taxi with several other tourists. This time, we took the train: called the Leonardo Express! It sounded like fun and I thought it was going to be like a bullet train. It wasn’t. It was more like a turtle train.

We met up with Holly and Lacey at the hotel and set off to see what we could see. We rode the “Big Bus” – a hop-on, hop-off style bus that took us all around the city, passing the Colosseum, the Circus Maximus, and many local historical places. As we drove past the Colosseum, I could see wheels turning and little book-shaped hearts floating out of Lacey’s eyes as she dreamed up more writing material.

Friday, the rest of our group showed up, and we immediately headed out with Marco, our tour guide, who led us on a harrowing trek into the depths of Rome’s subway.  Saturday, a new guide named Deborah took us to the Colosseum. She told us we needed to see the “EsPANisha StEPsa” which I’d never heard of until I realized she was saying “Spanish Steps”.  Then there was the “EsTAchoo of the Four REEvers” which puzzled me. Turns out, it was the Statue of the Four Rivers. 😉

It rained on and off, mostly on, all day Saturday. At the Colosseum, somehow our ticket situation got messed up and we didn’t get to “skeep the line”! We waited in long lines, in rain. We had gross subway pizza. Then we went to the Vatican Museum, waiting in more long lines, and it was even more crowded than last year. Then our bus driver decided not to wait for us, and we had to walk a mile or ten. Nothing went right for us that day, except for being with lovely people, and now we are able to laugh about it.

Sunday, we worshipped together and then traveled to the cruise ship port in Civitavecchia. Since then, we’ve had two relaxing days at sea, and a day in beautiful, colorful Crete. We’ve enjoyed watching the sun set on the Mediterranean and we’ve especially loved getting to know a wonderful new group of friends. Tomorrow we get off the ship for two nights and three days in Israel. I can’t wait for our group to learn in Israel. What a blessing!

Thank you for prayers and encouragement!